Seventeen years ago this week, I lay awake in a hotel halfway around the world, staring at the ceiling long into the night. I wondered, with anxiety, how I was going to rearrange my life to become a good mother to the adoptive twin daughters I would be entrusted with the next morning. My husband was not plagued with such worries. He slept, snoring softly, in the twin bed across the way (in China at that time, twin beds were the norm).

I wanted to become a mother. That was not the issue. I had waited through not wanting children to desiring them deeply, but being with the wrong man. I had waited through breaking up with that man, dating, and finding the right one who wanted me, marriage, and children. I had waited through trying to conceive, fertility treatments and being told my eggs were “too old.” I had waited through 20 months of paperwork, expecting word “any day,” further delays, then receiving the joyful news of twins. The two-month wait to travel had finally elapsed, and here I was in China, filled with trepidation about my new role as mother.

I was a mature woman with a solid career as an executive at a trade association, a robust group of mostly-single friends, and a well-rounded list of hobbies. I feared I was too independent, too set in my ways, too self-focused and too career-oriented to become a good mother.

Somehow, I stepped up to the role of being the mother I’d hoped to be, and even excelled at it, most of the time. That is really the best we can hope for, since the role of parenting doesn’t come with an instruction manual.

This week, seventeen years later, I found myself staring at another ceiling in a hotel in Arizona. This time, my husband snored softly at my side, and my twin daughters slept peacefully in a queen size bed across the room. We’d planned this vacation to Sedona, recognizing it might be the last as a family, at least for a while, as they set off on their own for college, internships, boyfriends and first jobs. 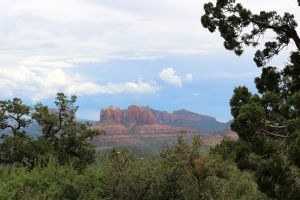 Again, I find myself wondering how I will rearrange my life to accommodate my daughters not being a significant presence in each day. While I never gave up who I was during the past 17 years, my career and hobbies ebbed and flowed around parenting, and into a life that better accommodated motherhood.

Like the wind and water that slowly carved and shaped the beauty of the red rock landscape that is Sedona, motherhood has worn away rough corners, unearthed vulnerabilities, and revealed an inner wellspring of emotion unknown in me before.

How will I weather the changes?

This site uses Akismet to reduce spam. Learn how your comment data is processed.