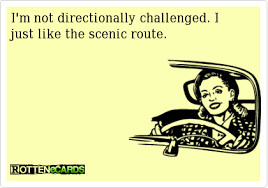 I have a reputation for being directionally challenged. I blame it on evolution. Men clearly have an edge in the navigation department. If my female ancestors had been hunting buffalo (at long distances) rather than gathering berries (nearby), I bet I’d have a better sense of direction today.

In theory, you’re not lost as long as you have an accurate map and a full tank of gas. In reality, you can waste a lot of time and gas being “not lost.”

So, I’ve learned the hard way to never go anywhere without my GPS. Also, a map, in case of spontaneous GPS combustion or defection.

My initial GPS was named Lee. Lee had a lovely “Outback” Australian accent. When I first got him, he had a full head of — I’m imagining blonde — hair. By the time Lee “retired,” he was bald from pulling it out. “Recalculating” was his favorite word.

I now own a GPS named Barbara. She has a soft, sultry voice and doesn’t even curse when I detour. I have to say, though, she has taken me on some seriously wild goose chases. I can’t figure out whether she suffers from ODDD (Occasional Directional Deficit Disorder), or she takes an occasional nip to deal with my whimsical direction following.

Honestly, I don’t know what I’d do without my GPS…although I must admit I haven’t seen nearly as much of the country as I did when maps were my sole guide. For example, I’m one of only two individuals (both of whom happened to have been in the same car) who can claim the distinction of driving from Rochester, NY to the Pocono Mountains by way of Erie, Pennsylvania.  In my defense, it was night, and we had no GPS. But when I passed a large, well-lit casino that had never been on that route during daylight hours, you’d think I’d have gotten suspicious. We spent an additional 4.5+ hours and 257 miles being “not lost” on that trip from Rochester to the Poconos.

While I do like my GPS, I’m really waiting for the self-driving car. According to an article on autonomous vehicles, there are five levels of automation in self-driving cars, with one being the lowest and with four being, well, “a car you could sleep in.”

If the level five car guarantees you can’t get lost, I’ll be first in line to buy one.

Once I find the dealership.

This site uses Akismet to reduce spam. Learn how your comment data is processed.